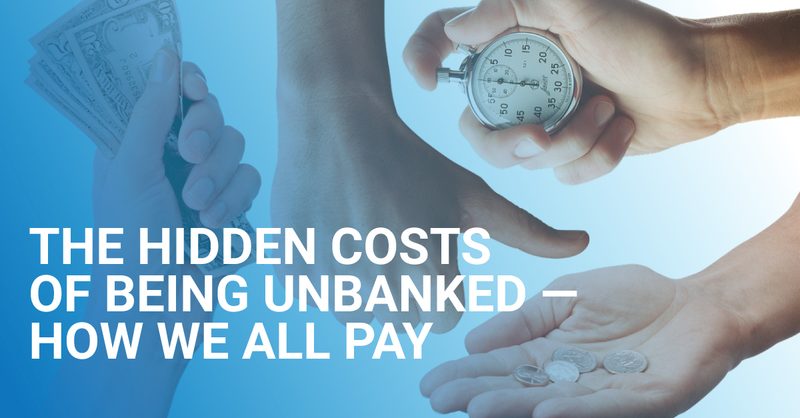 The Hidden Costs of Being Unbanked — How We All Pay

When was the last time you paid your bills? How did you pay them?

For many of us, including myself, the answers are: once in the past month, and electronically through a bank account. Which is great, for us. But what about people who don’t have a checking or savings account at a bank or credit union – those who are unbanked?

Last month I shared in a blog post four unexpected facts about the unbanked, illustrating the reality that many Americans (around 7 million households) are unbanked. This month I want to illuminate some of the hidden costs of being unbanked – costs borne directly by the unbanked and, less directly but no less importantly, by those of us who are banked.

While there are notable costs of being unbanked related to issues like credit and lending, I want to focus on those related to bill paying. Without the ability to pay bills electronically through a bank account, the unbanked most frequently rely on cash and alternate methods of getting that cash to their utility company (or tax assessor, judiciary, etc.). There are significant costs, beyond the actual payment required, to handling financial transactions this way. These costs are both tangible and intangible.

Time:
The primary alternative to paying electronically is paying in person. This requires having the time for a trip to a payment center and the time to stand in line once there. And it requires having this time during weekday business hours when payment centers are typically open. For most people, this imposes a cost in time off work, since it generally takes longer than a 30-minute or even a 60-minute lunch break to complete this task.

Bill-Paying Service Fees:
Another alternative to paying electronically, forced on some of the unbanked by limited time-off-work or transportation options, is using a bill-paying service. Such services stay in business by charging fees that the unbanked with limited (or no) ability to pay in person have no choice but to incur.

Dignity:
Although we know there are higher unbanked rates among lower-incomes populations, that does not mean the unbanked are uniformly unable to pay their bills. In fact, to be clear, many who are unbanked have the means to pay their bills and want to pay their bills but find it challenging (for the reasons described above) to do so. And they often feel a loss of dignity having to work around a system that fails to accommodate their real-world circumstance. This loss of dignity is an intangible but no less important cost of being unbanked.

Costs We All Incur Indirectly

At first glance, being unbanked appears to impose costs on only those who are in that situation. But there are less obvious costs that the rest of us incur due to the situation. And these, too, are both tangible and intangible.

Higher Rates:
Because being unbanked imposes challenges significant enough that some people either cannot or do not pay their bills, service providers often find a straight user-fee system doesn’t work as intended. Collection attempts are almost always made, but at the end of the day, some people who receive services don’t pay. And that means that others who receive those services pay more. In effect, those of us who pay our bills subsidize those who do not or cannot.

An Exclusionary System:
Us versus them. The haves and have-nots. Those of us who move freely through a frictionless, cost-free bill payment system and the unbanked who cannot do the same.

At one time or another in our lives, we all have felt the sting of exclusion and know that it comes with a cost – maybe of feeling personally “less than,” but certainly of being a less-than-full participant in whatever is going on around us. Individuals are hurt by exclusion, but that exclusion costs their larger group or community something as well. While the costs of excluding the unbanked from easy, convenient bill payment systems are less tangible than those incurred through a rate hike, they nonetheless affect us all.

Being unbanked costs us all in ways both tangible and intangible, and it does so on a rather large scale.

So the next time you or I sit down and spend less than 15 minutes paying bills, let’s think about the costs incurred several times every month by those 7 million households – and the rest of us – as they make good-faith efforts to pay their bills. And consider how we can work together to minimize or even eliminate those costs, to make bill paying systems more inclusive.

I’ll be back soon to talk about the history my company, DivDat Kiosk Network, has of solving problems and how we are trying to tackle some of the issues associated with being unbanked, which clearly impact us all. In the meantime, please share your thoughts on this post in the comments – I’m interested in hearing what you think!

Jason Bierkle is President and CEO of DivDat Kiosk Network and currently on a mission to promote the inclusion of the unbanked and underbanked in today’s online banking and bill paying services environment through free, convenient, self-serve payment kiosks.