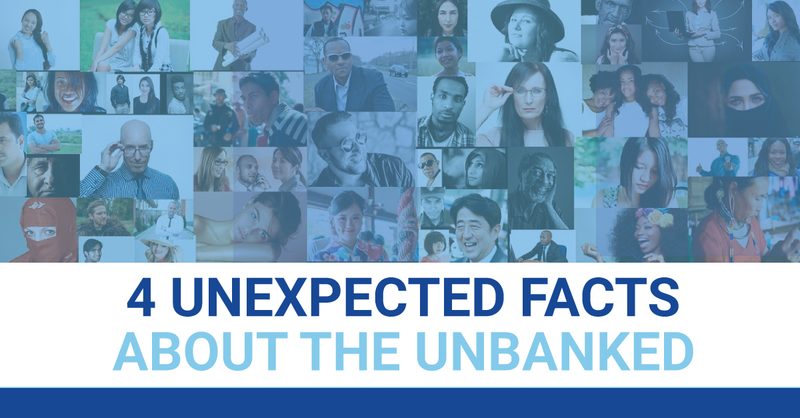 4 Unexpected Facts About the Unbanked

From time to time, we see stories in the news that refer to unbanked households — defined by the Federal Deposit Insurance Corporation (FDIC) as households in which no one has a checking or savings account at a bank or credit union.

Perhaps our first reaction is disbelief: How can anyone live in today’s high-tech, fast-paced, debit- and credit-based world without a checking or savings account?

And maybe our second is certainty: That’s not me or anybody I know, but I bet I can describe those people, the kinds of people who don’t have a bank or credit union.

You may be surprised — as I was— to learn who “those people” are. I’d like to highlight a few facts about the unbanked, drawn largely from the FDIC’s 2019 Survey of Household Use of Banking Services.

Fact #1: The Unbanked Are a Substantial Number Among Us

The FDIC has conducted their Survey of Household Use of Banking Services biennially since 2009 (in partnership with the U.S. Census Bureau). And while this most recent 2019 Survey tells us that the reported 5.4% of U.S. households that are unbanked is the lowest percentage recorded since the survey began, that percentage still represents approximately 7 million households.

Add to that the 16% of U.S. adults the Federal Reserve’s Report on the Economic Well-Being of U.S. Households in 2019 reports are underbanked — defined as having a bank account, but also having used an alternative financial services product, such as a check-cashing service, payday loan, or paycheck advance — and we’re talking about another 40 million or so people living on the fringes of the traditional banking system.

Even in a country of some 255 million adults, we’re talking about a substantial number of our fellow citizens.

Fact #2: The Unbanked Live Everywhere the Rest of Us Live

While the FDIC data show unbanked rates as being highest in the South, at 6.2%, unbanked households exist in all regions of the country: The Midwest has a rate of 5.0%, the West has a rate 4.9%, and the Northeast has a rate of 4.7%, with the difference between the South and the other regions having narrowed in recent years.

Essentially, there are unbanked households everywhere people live, all across the United States.

Fact #3: Many (Not All) Unbanked Share Some (Not All) Characteristics

Although the information from the FDIC paints a picture of higher unbanked rates among lower-income, less-educated, Black, Hispanic, American Indian or Alaska Native, and working-age disabled households, along with households with volatile income, that picture isn’t complete. It’s important to know that there is also some percentage of unbanked households in every not-named category. For example, unbanked households include:

All of which suggests that the majority of unbanked may share certain characteristics, but not entirely or exclusively.

Even as the FDIC survey results confirm that the main reason unbanked households most frequently cite for not having a bank account is insufficient funds to meet minimum balance requirements, it’s also true that being unbanked is, for some, a choice: The second-most cited reason for being unbanked, mentioned by approximately one-third of unbanked households, is distrust of banks. (Perhaps predictably, high fees and diminished privacy were also cited — though less frequently.)

So, while it’s true that many of the unbanked can’t get a checking or savings account, it’s also true that some simply don’t want one.

here is no short or simple answer to the question: Who are the unbanked? Because truly, the unbanked can — and may — be any one of us, any one of our fellow citizens, no matter where we live, how much money we make, how well-educated we are, or what box we check for race/ethnicity.

This is the first in a series of blogs about why we should all care about the unbanked and underbanked among us and what my company, DivDat Kiosk Network, is doing to serve these communities. Please share any thoughts or reactions in the comments — and look for my next post.

Jason Bierkle is President and CEO of DivDat Kiosk Network and currently on a mission to promote the inclusion of the unbanked and underbanked in today’s online banking and bill paying services environment through free, convenient, self-serve payment kiosks.